The vast and varied program of the New administrative centre of the Czech Forestry in Hradec Kralove as well as the necessity of its smart execution in phases due to the layout of the existing buildings on the site have an important influence on the main idea of this competition proposal. The aim of the design is to divide the required program into five buildings radially disposed around the centrally located hub that acts as the internal public space and at the same time the connector between different departments. The final layout of the complex based on the five pointed star sunk in the nearby greenery allows for a deep integration with the surrounded landscape, providing at the same time a high quality working environment with the direct contact with nature. 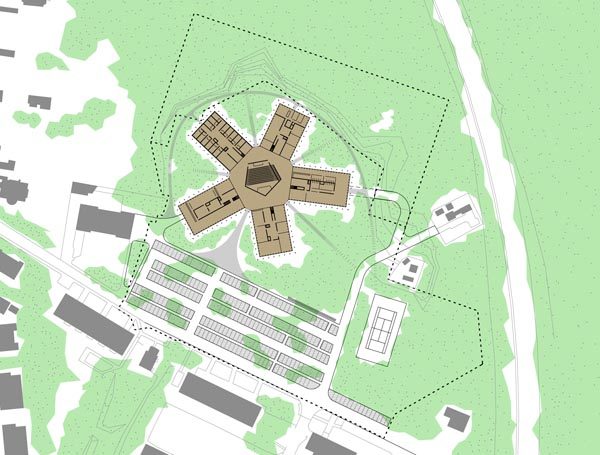 The main entrance located clearly in between the two southern arms follows to the central part of the administrative center which houses the additional service functions and the main conference hall. The rest of the common program including restaurant, small conference rooms, library, fitness zone and apartments is located also on the ground floor level, but arranged in different arms/buildings. The spatial disposition of each building is designed in the similar way – with centrally located staircase, inner peripheral corridor and the sequence of the office rooms divided according to the program requirements. Due to the assumed layout of the complex all working spaces use a natural light for illumination. 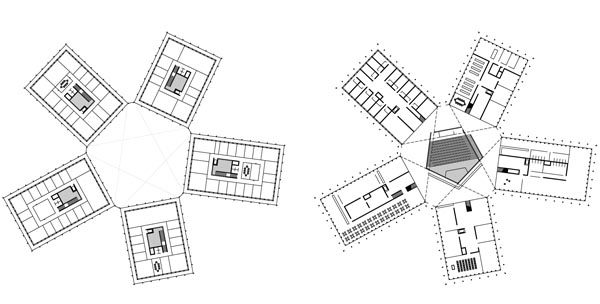 The timber structure of the designed objects appears in the interiors of the building as well as on its façades. The revealed external wooden pillars, beams and platforms, that can be used as the technical passage but first of all as an open air extension of the office space dedicated to the employees, create an unusual image of the new complex. The light platforms play also an important role in the energy balance of the building by protecting the internal spaces against overheating during summer days and at the same time by enabling the use of passive solar energy during winter. 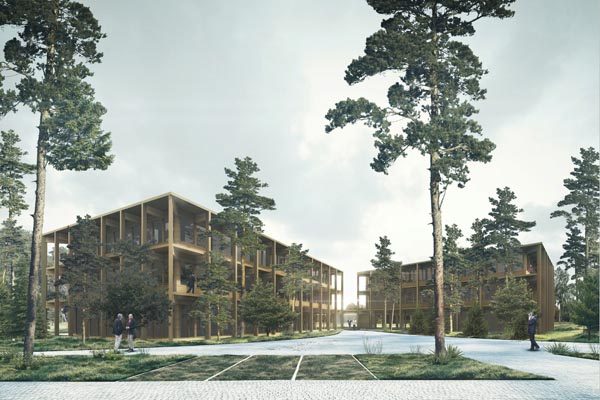 The five arms of the complex and it’s central part as well are structurally independent thus allow erection of all parts in phases directly related to the demolition of individual existing buildings and the relocation of employees to new facilities.

The close surroundings of the new administrative complex is assumed to be mostly planted with local species of high greenery. The close relation between the designed work space and the outside greenery that is almost entering the buildings is meant to be one of the most characteristic and reference element of the future complex. The perimeter of the built area is partially enclosed by the service road that connects the parking area on the south with secondary entrances and underground delivery zone. The recreational area with tennis court has been designed in the adjacent green zone on the east part of the plot, surrounded with the existing forest and convenient distance from the buildings.