The designed pedestrian-bicycle bridge that connects both banks of the Vistula River is not only a structural and landscape challenge, but also a formal one. As a new visual sign in the city landscape it emphasizes the significance of a new link between central district of Warsaw and revitalized Prague and at the same time becomes a new sightseeing attraction with a stunning view on the Vistula river and city skyline. The proposed arched structure of the footbridge, stiffened with a pedestrian-bicycle bridge, thanks to a specific two-level structure allows not only for a convenient combination of different heights and communication routes on the east and west side, but also offers a unique viewing experience. Proposed structure of through arch bridge allows not only for the connection of the different circulation levels on western and eastern banks of the bridge but also offers the unique viewing experience from the top of it.

This type of bridge structure has already been embedded in the context of Warsaw in the 19th century through the unrealized concept of an arch bridge by Felix Pancer in 1830. As reported at that time: “this beautiful bridge has been suddenly cancelled” and the planned investment, unfortunately, was never constructed, leaving until today a free space for a new and recognizable dominant.

XIXc. design of the bridge by Felix Pancer

Proposed design fulfills the requirements of local masterplan for both the right and left bank of the river. The footbridge connects the banks at the extension of Karowa Street on the east side and Okrzei Street on the west side, which are built on two levels – each with its own circulation routes.

The new bridge designed as a single-span arch and a deck hung on the cable strings links the existing functional levels on both sides and offers a possibility of fast walk at the bottom level as well as a panoramic tour on the arch with a viewing terrace on top of it. Carefully designed and diversified cross-sections of the arch and deck provide a convenient width of the bridge allowing for comfortable walking and cycling at junction points (intersection of the arch with the deck) and on the viewing platform and also take into account the foundation and stability of the structure. 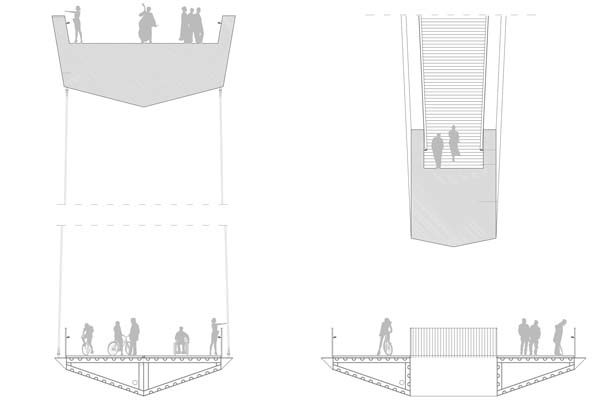